As iron sharpens iron, so one person sharpens another.
(Proverbs 27:17 NIV)

The Classics Book Club will be postponed until further notice. 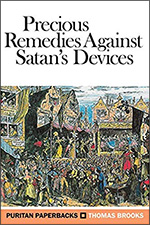 April 19 | 1 p.m. | Conference Room
Please join us for a discussion of Precious Remedies against Satan's Devices by Thomas Brooks.

Join us on selected Sundays of each month for a lively discussion of some spiritual classics. Books are available for checkout in the Media Library.

The Classics Book Club strives to study Scripture at a deeper level, aided by time-honored works by established Christian giants. We dig into themes and concepts, such as humility, prayer, worship and entertainment, holiness, grace, the Holy Spirit, and discipleship, using books by A.W. Tozer, J.I. Packer, Billy Graham, Dietrich Bonhoeffer, Francis Schaeffer and others.

We seek to avoid "rusty swords" and, therefore, follow Proverbs 27:17, which says, "As iron sharpens iron, so one person sharpens another."

For more information, contact Martha Dendinger in the Media Library or This email address is being protected from spambots. You need JavaScript enabled to view it..

Abide in Christ / Abiding in Christ, by Andrew Murray
Found: God's Will, by John MacArthur
A Christian Manifesto, by Francis Schaeffer
Grace Abounding, by John Bunyan
Prepare, by J. Paul Nyquist
Right Thinking in A World Gone Wrong, by John MacArthur
On Christian Doctrine (Teaching Christianity), by Augustine of Hippo
Adventures in Prayer, by Catherine Marshall
The Knowledge of the Holy, by A.W. Tozer
The Holiness of God, by R. C. Sproul
The Cost of Discipleship, by Dietrich Bonhoeffer
Seeking Allah: Finding Jesus, by Nabeel Qureshi
Living as a Christian: Teachings from First Peter, by A.W. Tozer
How Christianity Changed the World, by Alvin J. Schmidt
Answers to Prayer, by George Müeller
Twelve Ordinary Men, by John MacArthur
Spiritual Maturity, by J. Oswald Sanders
Being God's Friend, by Charles H. Spurgeon.
Doctrines that Divide: A Fresh Look at the Historical Doctrines that Separate Christians, by Erwin Lutzer
The Lord's Table, by Andrew Murray
The Holy Spirit, by John Owen
Foxe's Book of Martyrs, by John Foxe
Not I But Christ, by Stephen Olford
Liberating Prayer, by Neil Anderson
Unlocking the Mysteries of Genesis, by Henry Morris III
The Mind of Christ, by T.W. Hunt
True Spirituality, by Francis Schaeffer
Christ the Eternal Son, by A.W. Tozer
Heaven, by Randy Alcorn
Know Why You Believe: Connecting Faith and Reason, by Paul E. Little
The Abolition of Man, by C. S. Lewis
Who Are You to Judge?, by Erwin Lutzer
Hinds' Feet on High Places, by Hannah Hurnard
The Attributes of God, by A.W. Pink
Mere Christianity, by C.S. Lewis
Studies in the Sermon on the Mount, by Oswald Chambers
When a Nation Forgets God, by Dr. Erwin Lutzer
Why Revival Tarries, by Leonard Ravenhill
Confessions, Augustine
A Passion for Holiness in a Believer's Life, by Charles H. Spurgeon
Our Ultimate Refuge, by Oswald Chambers
The Pilgrim's Progress, by John Bunyan
Knowing God, by J. I. Packer
How to Pray, by R.A. Torrey
The Pursuit of God, by A.W. Tozer
Art and the Bible, by Francis Schaeffer
Humility, by Andrew Murray
God's Smuggler, by Brother Andrew
The Rest of the Gospel, by Dan Stone
Real Christianity, by William Wilberforce
The Holy Spirit, by Billy Graham
Bonhoeffer: Pastor, Martyr, Prophet, Spy, by Eric Metaxas
The Great Divorce, by C.S. Lewis
Imitation of Christ, by Thomas á Kempis
Bless and Be Blessed, by Peter Lord
With Christ in the School of Prayer, by Andrew Murray
A Shepherd Looks at Psalm 23, by Phillip Keller
Hearing God's Voice, by Henry Blackaby

Where do I begin reading the Bible?

Lower level, next to the Chapel

Martha Jo Dendinger
Librarian
770-234-8269
This email address is being protected from spambots. You need JavaScript enabled to view it.